8 TOP TOURIST ATTRACTIONS IN THE LAND DOWN UNDER, AUSTRALIA 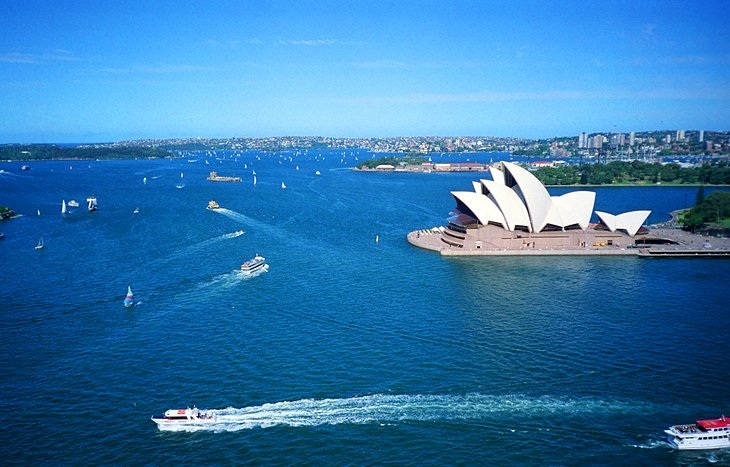 Australia, known as the Land Down Under surely offer each traveler a one of a kind experiences since it has a lot of things in store for everyone. We’re here to help you create your adventure. We’ve listed the top-rated tourist attractions in the country. If you’re heading to Australia real soon? Choose QantasLink Airlines and rest assured that you’ll reach your dream destination without any hassle.

If you want to monitor your flight, you can make use of this flight tracker. Thru this, you can track planes as seen on their flight tracker map and even get up-to-date flight status and airport information. Not just that, you can also be aware of the details about the aircraft such as speed, altitude, arrival and departure times, cancellations and even flight delays.

What are you waiting for, pack your bags and let’s get going!

The popular structure that is shaped-like huge shells or billowing sails is known as the Sydney Opera House.  It is included in the list of the UNESCO World Heritage Sites and also known as one of the world’s great architectural icons. You can find it at the Sydney’s Bennelong Point surrounded by the water on its three sides and the Royal Botanic Gardens borders it to the south. The construction of the Sydney Opera House was finally completed in 1973. It is one of the magnificent creations of the Danish architect named JørnUtzon. Today, you can witness live performances here, dine on of the restaurants in the area, or even take a tour of the building to see its theaters, studios, concert halls, cinema and exhibition rooms.

Australia is home to some of the significant places or attractions listed under the World Heritage Sites like the Great Barrier Reef. This largest living structures on the planet is visible from outer space. This was established to protect the fragile ecosystem that includes coral reefs, continental islands, coral cays, and inshore mangrove islands. Great Barrier reef stretches along with the state of Queensland. If you want to see the colorful world under, you can join activities like diving or snorkeling. If you prefer to stay dry, don’t worry, you can still see the reef from the underwater viewing stations and on glass-bottom boats. The main jump-off point for the tours is located in Cairns, Port Douglas, and Airlie Beach.

One of the most photographed natural wonders in Australia is the Uluru or formerly known as the Ayers Rock. Be ready to witness this red monolith thatis located at the center of the Uluru-Kata Tjuta National Park. At the said park, you will also see the red dome-shaped rocks called Kata Tjuta or the Olgas. Majority of the travelers here are patiently waiting for the moment when the sun dips in the sky because they want to watch how the colors of Uluru and Kata Tjuta transform in the shifting light. It is suggested that you join a tour led by Aboriginal guides and rangers to be well-inform and better appreciate these sacred sites.

Aside from the Opera House, Sydney Harbour Bridge is also one of the most famous tourist attractions that you can find in this country. It is said to be the largest steel arch bridge in the world that was completed in 1932, exactly 40 years before the Sydney Opera House. This bridge links Sydney’s North Shore to the business district which features a pedestrian path, two railway lines as well as eight lanes for road traffic. What’s amazing about it is that each lane can be switched to accommodate traffic flow. If you want to enjoy the spectacular views of the entire city, join the guided ascent to the tops of the bridge.

Another UNESCO Heritage Site, Blue Mountains National park is one of the popular day trips from the city. Its name was derived from the blue haze originating from the many eucalyptus trees. This spectacular park protects over 650,000 acres of wilderness which includes waterfalls, the dramatic gorge, aboriginal rock paintings, and over 140 kilometers of hiking trails. The most popular attraction that can be found inside the park is the Three Sisters or the towering sandstone rock formations. Another highlights on your visitation here are the Katoomba Scenic Railway or also known as the world’s steepest railway. Other activities include hiking, abseiling, rock climbing, mountain biking, and horseback riding which are also popular in the area.

For those culture-seekers, Melbourne is the place to be. It is known as Australia’s second-largest city and is home to Royal Botanic Gardens; Federation Square; the National Gallery of Victoria; and the Melbourne Cricket Ground. You can also visit various galleries and theaters in the area. If you want to shop until you drop, head over the to the elegant Royal Arcade on Bourke Street, Chapel Street, the Melbourne Central Shopping Center, and Queen Victoria Market.

One of the world’s famous beach known for its blond sand and home to one of the oldest surf lifesaving clubs in the world is the Bondi Beach. It will only take you around 15-minute drive if you’re coming from the city center perfect for a seaside stroll or picnic spot. You can also find shops, cafes, and restaurants across the street of this famous coastal strip. Other attractions in the area include the Sunday market, ocean pool, and skate park. If you want to swim, please be guided that swimmers should only stay between flags due to the strong rip tides.

Fraser Islandis listed on the World Heritage as the largest sand island in the world and also one of the country’s top outdoor adventures specifically for those four-wheel drive enthusiasts. As you roam around the island, you’ll see crystal-clear freshwater creeks and lakes, and ancient rainforest rich with varieties of plants and animals. You can access the island through ferry commencing from the Rainbow Beach and Hervey Bay.

Gallbladder stone: What are the symptoms?

Fascinating Facts About the Human Eye

How can relationship between couples improve and become strong