How castor cultivation has become a profitable business in India? 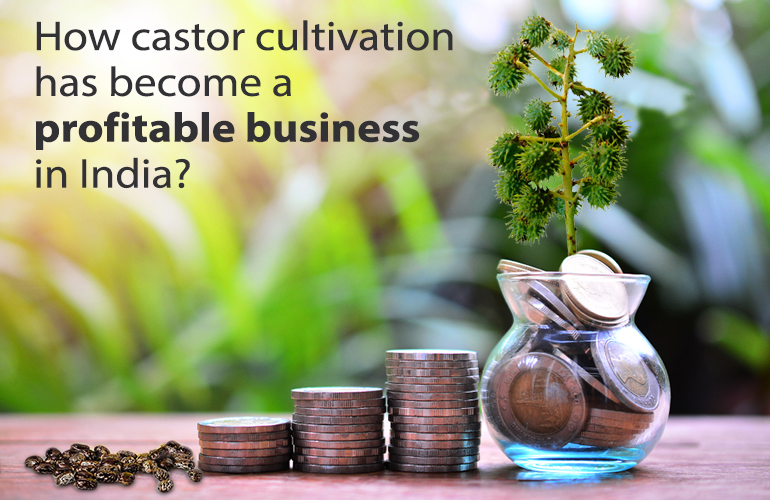 Centuries ago, people admired the use of castor plants and called them due to its healing properties. Often people referred to as “Palma Chiste”, due to the shape of its leaves that resembled the hands of Jesus Christ. Research suggests that earlier Egyptians used castor oils for therapeutic purposes. Although castor oil has varied therapeutic values, yet the seeds being highly toxic for humans, unless treated and labeled edible, castor oil has its maximum uses for industrial purposes. Apart from using castor as a seed crop in paper and medicinal industries, it is a great feed for the cattle.

Castor seed or Ricinus Communis emerged as the major oilseed cultivation in arid and semi-arid regions of the world. Although being a native crop for Eastern Africa, today Gujarat state of India holds the leading position in the world for exporting natural castor oil. Recently, there has been a rise in the yield from 2000 kilogram per hectare to a hooping double of 4000 kilogram per hectare. Now, most of you might inquire how farmers carry out for castor cultivation.

Cultivated as both Rabi and Kharif crops, the farmer requires around 2 to 2.5 kilograms of hybrid variety of seeds for cultivating castor in an acre. However, the yields as a Rabi crop are higher than the Kharif ones. Approximately the farmer yields 10 to 12 quintals from one acre of castor field, for which the market price is Rs. 4500 to Rs. 5500 per quintal. The pricing of the seeds depends completely upon the quality of the crop produced.

The varieties differ in branching habits of the plants, color of the branches and stem, nature of capsules, duration required to grow, the size and shapes of the seeds and the amount of oil the castor oil manufacturers in India can extract. Although there are several high yielding variety seeds, the farmers prefer using Pragathi, Haritha, Jwala, C.H-519, C.H-177, C.H-117 and C.S.-107. The other varieties include NPH-1, GAUCH-4, YRCH1, TMV5, TMV6, CO1 and TMVCH.

One can grow castor crops at different altitudes, including the sea level to altitudes about 1000 meter. However, the crop requires a hot and dry climate with annual rainfall not exceeding 800mm. However, the crop requires occasional rainfall. It requires 500-600mm of rainfall during its growth in the first three months. As castor is an ideal crop for marginal lands of the Dry Zone, where the farmers can grow the crop both under rain fed and irrigated methods. Moreover, the crop is highly sensitive to high humidity and temperatures more than 40◦C will damage the yield of the crop.

The farmers’ needs to invest approximately in the couple of thousands, including the rental charges for tractor and other implements required for production. The cost also incurs the wages of the labor who work on land, the driver charges of the tractor and the labor charges for cleaning the land from the weeds and previous crop residues. The farmers perform the step before sowing the crops.

India as the Leading Exporter of Castor Oil

India is the only country in the world that has the ideal conditions that support higher yield of castor crops. India enjoys monopoly in the segment, which is clear with 75% of the total castor crop production in the world, followed by China and Brazil. The nonedible grade of castor seeds emerged as the most versatile type of oil, having a wide range of uses in various industries.

Castor oil’s unique properties such as high specific gravity, thickness and hydroxyl values made it an ideal oil for industrial uses. Perhaps, it is one of the most important reasons for the rise in the exports of non-edible grade castor oil. Over the last decade, the exporting of the oil increased by about 12 times by value, from $56.17 million in 2006 to $703.81 million in 2015.

Although being the largest producer of castor oil, India consumes the least of the production and depends on other countries for consumers of castor oil. It accounts for 83.65% of the total global exports. With more availability of lands and yield levels, the production of the crop in India never falls down. The major industrialized nations around the globe require more castor oil to run their industries.

The major consumers in the sector include China, Thailand, Europe and Japan. China has a great demand for sebacic acid; and hence, requires more castor oil. Castor oil manufacturers exported 30.67% of the total global castor oil requirement to China, which values $215.87 million.

Brazil during the 70s was the largest global producer or castor seeds. However, the country changed its focus towards cultivation of soya bean seeds, which has higher yield than castor seeds and greater demand for export for its oil and beans. Most of the present wealthy nations round the globe followed Brazil’s footsteps, leaving India with the monopoly.

Located in Gujarat, the state with largest production and export of castor oil in the world, Ambuja Solvex emerged as one of the reputed castor oil manufacturers in India. With assurance of quality and sustainability, the firm helped several other industries in meeting the demands for the best quality castor oil.

Even though castor plants can survive in most of the nation’s lying in the warm zone, yet India holds the monopoly even today. However, India became the largest producer and exporter of castor oil after Brazil shifted its focus of cultivation. Although India is the leading supplier of castor oil in the world, it failed to leverage the monopoly due to availability of synthetic substitutes at cheaper rates.

How a Crypto ATM Differs from a Standard ATM

How to Find Good Employees in 2022

Cat Tips: 5 Ways to Keep Your Cat From Scratching Your Furniture